The Covenant of Works 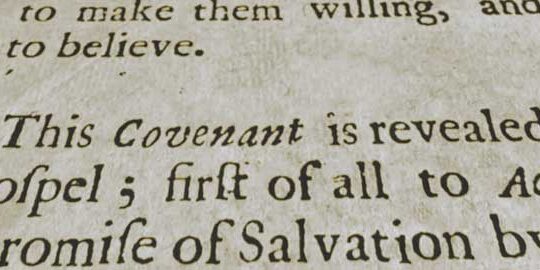 The curse which extends to the entire earth came about due to transgressed laws, violated statutes, and a broken covenant. Since the earth was cursed due to Adam’s sin as our representative, Adam broke covenant with God in the Garden of Eden and the effects of his covenant-breaking affects “those who live on the earth,” that is, everyone.…Here is a prophet, writing long after Adam was created and long after Moses wrote, utilizing principles that first started with Adam to explain the universal guilt of man. In this sense, Isaiah was very Pauline; or better yet, Paul was very Isaianic.[6]

Finally, the typology of Adam and Christ drawn by Paul in Romans 5 and 1 Corinthians 15 further solidifies the position that there was a covenant of works. In Romans 5:14, Paul specifically says that Adam was a “type of Him [Christ] who was to come.” When we survey the rest of the section, it is clear how Adam was a type of Christ: both men stood as federal heads relative to their descendants. Because Adam transgressed the covenant of works, he and his descendants were constituted sinners. Because Christ obeyed the covenant of works, his descendants are constituted as righteous. In Romans 5:19, Paul writes “For as by one man’s disobedience many were made[7] sinners, so also by one Man’s obedience many will be made righteous.” This Adam/Christ parallel only works if we understand a pre-fall setting for the arrangement with Adam. In other words, the promise made to Adam after the fall (Genesis 3:15) was the first promise of the covenant of grace. Therefore, to redefine, remove, or neglect the pre-fall covenant of works will ultimately run the risk of doing damage to one’s view of the covenant of grace. The distinction between law and grace, the doctrine of justification by faith alone, including the imputation of the active obedience of Christ are often the most likely doctrinal casualties when one tampers with the covenant of works. Wilhelmus a’Brakel noted this when he wrote,