The Preface to the Lord’s Prayer 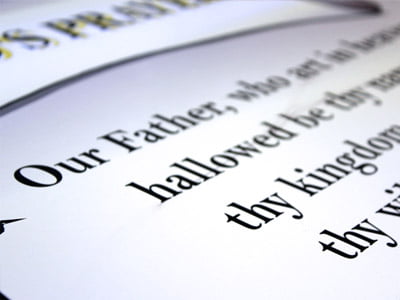 In Mt 6:1-18, the Lord Jesus addresses the issue of man’s approach to religious observances (almsgiving, prayer, fasting). He cautioned His disciples against praying like hypocrites and heathens. The Lord then gives His disciples a model to use for prayer. Calvin comments on the prayer:  “[Christ] embraces, therefore, in six petitions what we are at liberty to ask from God. Nothing is more advantageous to us than such instruction. Though this is the most important exercise of piety, yet in forming our prayers, and regulating our wishes, all our senses fail us. No man will pray aright, unless his lips and heart shall be directed by the heavenly Master.”[1] It is important to note that Jesus says, “In this manner, therefore, pray” – He doesn’t say “repeat after me with blind repetition” – that would be tough to sustain in light of vv.7-8. It is also important to note that after the preface, there are six petitions with a specific order:  God comes first. The Bible is conspicuously God-centered and while the unbeliever balks at such a truth, the believer delights in it. Prior to the petitions, the Lord Jesus highlights another important truth concerning prayer:  the believer is not to rush into the presence of his Father and immediately start asking for things; but rather the believer is to ponder who God is and ascribe praise, worship, and adoration to the Father. There are obvious exceptions to this general rule (the moment before a car collision, a fall from a high place), but the pattern ought to be reflected in the believer’s prayer life.

The Lord Jesus instructs His people to address God as “Father.” This title is loaded with meaning. In the first place, the Christian does not address blind fate or impersonal power, but rather a personal Father. Secondly, the title indicates the gracious character of God’s relation to us.  We are dead in trespasses and sins and completely alienated from God, but He “predestined us to adoption as sons by Jesus Christ to Himself, according to the good pleasure of His will” (Eph 1:5). This also indicates that this particular prayer is the possession of believers only. Carson notes, “The early church was right to forbid non-Christians from reciting this prayer as vigorously as they forbade them from joining with believers at the Lord’s Table.”[2] Thirdly, the title indicates that God our Father hears us. A fundamental problem with heathen idols is that “They have ears, but they do not hear” (Ps 115:6) – not so our God! The Lord Jesus said that when we got into our secret room, the Father who sees in secret will hear us and reward us openly. Fourthly, the title demonstrates that our Father cares for us. Peter encouraged his readers that when they pray, there are to do so by “casting all your care upon Him, for He cares for you” (1 Pet 5:7). Finally, the title reminds the believer that our Father loves us. Thomas Watson wrote, “He loves His children with such a love as He loves Christ (Jn 17:26). It is the same love, for the unchangeableness of it. God will not more cease to love His adopted sons than He will to love His natural Son.”[3]

The Preface to the Lord’s Prayer not only calls the believer to address God as Father, but it also encourages the child of God to remember that the Father is “in heaven.” God occupies a position of authority over His creation. In theological terms, this means that God is transcendent.  While God is omnipresent (is always present with His people), He is also independent of His creation and over His creation. Secondly, the position of God in heaven reminds the believer that God is sovereign. The Psalmist demonstrates a fundamental difference between the gods of the nations who cannot speak, see, hear or smell, with the God of heaven and earth who is in the heavens and therefore “He does whatever He pleases” (Pss 115:3; 135:5-6). Thirdly, the position of our Father encourages the believer by reminding him of God’s omnipotence. God may love His people, hear them when they call upon Him, and care for them, but stripped of His ability to come to their aid, He would be reduced to an impotent, albeit sentimental being, who cannot undertake on behalf of His children.

The Preface to the Lord’s Prayer further teaches that prayer is to be intelligent. The heathen are known for multiplying words in order to be heard; the believer is to pray with intelligence to his prayer hearing God. Intelligence here should not be misunderstood; intelligence means knowing the Bible, knowing good theology, and praying God’s thoughts back to Him. The 2nd London Baptist Confession of Faith of 1689 puts it this way, “prayer… [is to be with] understanding, reverence, humility, fervency, faith, love, and perseverance…” The practice of Christian prayer is not an exercise wherein the believer empties his mind and approaches an idol in a spirit of ecstasy and carnality; but rather it is an exercise where the believer understands who God is and approaches Him accordingly. Because this is the case, the believer must know God and must address Him accordingly. Prior to rushing in to the presence of God and telling Him all the things He can do for you, take some time, reflect upon the written word, understand who your Father is, delight in the position of absolute sovereignty He occupies, and then worship through prayer.