You are here:
Book Review 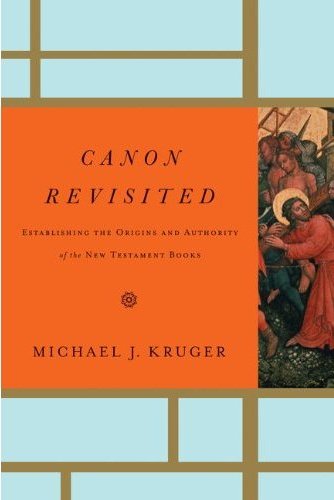 Canon Revisited: Establishing the Origins and Authority of the New Testament Books

Dr. Michael J. Kruger currently serves as President and Professor of New Testament at Reformed Theological Seminary in Charlotte, NC. His book Canon Revisited (CR) is an excellent work that deserves attention by all Reformed Baptist pastors and theological students. The average reading layman in one of our churches would also richly benefit from this work.

In the Introduction, Kruger highlights the necessity for his work on the canon. The issue he addresses in the book is how the Christian can know that the twenty-seven books that comprise the New Testament are in fact the right books. He rightly understands what is at stake in the discussion of canon: “The question of the canon, therefore, is at the very center of how biblical authority is established” (16). He alerts the reader to several factors that produce continued interest in the question of canon, and then indicates the strategy of the book. Kruger does not attempt to “prove” the truth of the canon that would be persuasive to the skeptic (21). Rather, the focus of the book is accounting for the knowledge of the canon that the church possesses (21). In my estimation, Kruger ably accomplishes his goal and provides a great deal of data that both encourages the reader and enables the reader to engage those who question the canon.

In Part I, Kruger surveys the different approaches to the question of canon in the history of the church. He rightly identifies that a study of canon occurs in a larger context. As he points out in the Introduction,

In particular, too little attention has been given to understanding overarching canonical models that often determine one’s definition of canon in the first place. A canonical model is just a way of describing a particular canonical system, if you will, which includes the broader methodological, epistemological, and yes, even theological frameworks for how canon is understood, and, most importantly, how canon is authenticated. (28)

Kruger includes the community and history models in his preferred model, but he points out the limits of each if considered in isolation from other considerations.

In chapter 3, Kruger deals with the canon as self-authenticated model. After describing what is and what is not involved in the concept of a self-authenticating model, he then discusses the components of it which include providential exposure of the New Testament books and the attributes of canonicity and the Holy Spirit. The attributes of canonicity that Kruger highlights are the divine qualities intrinsic in the canonical books, corporate reception of the books, and the apostolic origins of the books. He draws some implications and ends the chapter by considering some “potential defeaters” of the self-authenticating model. These potential defeaters are: first, the challenge to divine qualities (i.e., apparent disagreements and/or contradictions between Testament books); second, the challenge to apostolic origins (i.e., a number of New Testament books were not written by apostles); third, the challenge to corporate reception (i.e., there was widespread disagreement in the early church that lasted well into the fourth century and beyond). The remainder of the book explains and defends the self-authenticating model and highlights various inconsistent methods along the way.

The gist of the argument is simple: What qualities does the Bible possess which indicate its divine origin and how are these qualities considered with reference to the question of “which books are in the canon?” Appealing to WCF 1:5 (so too 2nd LCF 1:5), Kruger highlights these qualities, such as the beauty and excellency of Scripture, the power and efficacy of Scripture, and the unity and harmony of Scripture. The chapter reinforces the notion that ought to be obvious: one’s theological convictions will certainly factor in to the way one approaches the question of canon.

In chapter 5, Kruger turns his attention to the issue of the apostolic origins of the canon. The chapter is not only excellent in terms of the overarching discussion of canon, but it is a good primer on covenant theology. He sets forth three helpful categories for his discussion: the structural framework for canon is covenant; the rationale for canon is redemption; and the agents of canon are the apostles. Building on the work of Meredith G. Kline’s Structure of Biblical Authority and others, Kruger effectively proves that “the historical-theological matrix of the first century made it the ideal environment out of which a new scriptural deposit could emerge” (193).

In chapters 6-8, Kruger treats the corporate reception of the canon. He considers the emergence of a canonical core in chapter 6, the issue of manuscripts and Christian book production in chapter 7, and problem books and canonical boundaries in chapter 8. His survey of both the biblical data and the apostolic fathers in chapter 6 is extremely helpful in showing that “a number of New Testament writings, largely by virtue of their apostolic connections, were recognized and received as authoritative from a very early time, so that by the middle of the second century there appears to be a “core” of New Testament canon widely recognized by early Christians.” (231)

His discussion of manuscripts and Christian book production in chapter 7 is fascinating. His treatment of 2 Timothy 4:13 is most interesting when he concludes that “one of the most compelling possibilities” is that the notebooks Paul wanted Timothy to deliver to him, “contained (among other things) copies of Paul’s own letters” (253, emphasis his). The chapter furtherer strengthens his conclusion concerning the reception of the canonical books early on in the church. He effectively handles the problem books and canonical boundaries in chapter 8.

The book ends with a very helpful conclusion that summarizes the entire argument. As well, Kruger draws some very helpful implications as a result of the study. In the first place, he notes that there is a great deal of common ground between the various canonical models. He notes: “Canon has an ecclesiological dimension, a historical dimension, and an aesthetic/internal dimension. It is when a single aspect of canon is absolutized at the expense of the others that distortions inevitably arise.” (293)

Secondly, “the decisive issue in canonical studies is one’s ontology of canon” (293). He writes that “the canon is, at its core, a theological issue” (294). He admits that this tenet is unlikely to be welcomed by the broader world of critical scholarship, but as he argues in the book, it is inevitable that one’s theology will affect one’s study of canonicity. The final implication necessarily follows, “Christians have intellectually sufficient grounds for claiming that they know which books belong in the New Testament” (295).

The canon as self-authenticating model he explains and defends provides a full-orbed treatment to the question of canon. As well, it provides a system of checks and balances which serves to protect the integrity of the canon. The book is well written, rigorously argued, stimulating and enjoyable to read, though it does demand careful attention by the reader. Above all, it honors the Scriptures as the God-breathed word. On a practical level, the Bible as the word of God is everything in Christianity. Questions concerning the Scriptures must be treated with care and precision. The question of canon is fundamental and an oft-recurring one. Kruger provides fodder for pastors who deal with questions concerning the canon of Scripture, whether those questions are asked by teenagers in the context of the local church, or atheists who are fundamentally opposed to the concept of canon at all. The self-authenticating model presented in CR will greatly assist the man of God in defending the word of God.

(This review was published in the 2014 Journal of the Institute of Reformed Baptist Studies and used with permission. For more information about the Journal, go to Reformed Baptist Academic Press at www.rbap.net.)

Does it seem complicated or impossible to be saved?
May 3, 2021

Who Shall Ascend the Mountain of the Lord?
February 13, 2018