Book Review: The Question of Canon

You are here:
Book Review 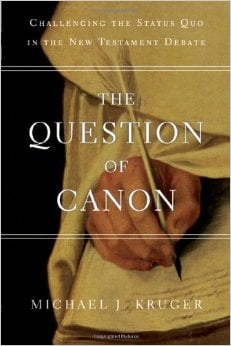 The Question of Canon: Challenging the Status Quo in the New Testament Debate

In the Introduction, Kruger sets forth the focus of the book. Unlike CR which demonstrated the criteria used in specifying which books are considered canonical, QC deals with the very “existence” of canon. According to Kruger, while the validity of the canon’s boundaries is still an area of concern, the attention has shifted to the validity of the canon’s very existence. The question now is, why is there a New Testament at all?”(17) He introduces two approaches to the question of canon, the extrinsic model and the intrinsic model. The extrinsic model assumes that “the idea of canon was, to some degree, imposed upon the Christian faith” (18). The preferred model and that which is defended in the remainder of the book, is the “intrinsic model.” He explains, “This model suggests that the idea of canon is not something imposed from the outside but develops more organically from within the early Christian religion itself” (21). He ends the Introduction by stating the purpose for the book: it is not to prove the intrinsic model but to show the problems with the five tenets employed by the extrinsic model. The five tenets are: one, there is a sharp distinction between Scripture and canon; two, there was nothing in earliest Christianity that might have led to a canon; three, early Christians were averse to written documents; four, the NT authors were unaware of their own authority; and five, the NT books were first regarded as Scripture at the end of the second century (23-24). The five tenets are each dealt with in subsequent chapters by Kruger and in each instance, he shows the problematic nature of the extrinsic model.

The first chapter is concerned with the definition of canon. Kruger says there are three ways to look at the definition. In the first place, the exclusive definition describes canon as a fixed, final and closed list of books. Secondly, the functional definition of the canon refers to “the entire process by which the formation of the church’s sacred writings took place” (34, quoting Brevard Childs). This means that the term canon can be used as soon as a book is regarded as Scripture (35). Thirdly, the ontological definition focuses on what the canon is “in and of itself, namely the authoritative books that God gave his corporate church” (40). Kruger highlights the benefits of definitions one and two, but also indicates the shortcomings. Kruger favors the third definition and argues persuasively for its adoption.

In chapter 4, the authors of canon are discussed. Those who challenge the question of canon assert that the apostles did not have an awareness of their role in the revelational process. Kruger states the thesis of chapter 4, “the New Testament authors, generally speaking, demonstrate awareness that their writings passed down authentic apostolic tradition and therefore bore supreme authority in the life of the church” (121). He then briefly discusses key passages in the Pauline letters, the Gospels, and other New Testament writings. He demonstrates beyond a shadow of a doubt, that the NT authors had a conscious awareness of their role in the revelational process. He ends the chapter by stating, “Thus, the existence of a new covenantal deposit of books was not due simply to Marcion’s heresies or to later church politics [theories propounded in the extrinsic model], but to the intentional activities of the New Testament writers themselves” (154).

In chapter 5, the date of the canon is addressed. The proponents of the extrinsic model point specifically to statements made by Irenaeus. Kruger explains, “The reason for this focus on the end of the second century is not hard to find. It is at this point that the major figure Irenaeus, bishop of Lyons, offers some of the clearest and most comprehensive statements on the canon to date” (156-157). Kruger discusses the particular statements of Irenaeus and then looks at other key evidence, contemporaries of Irenaeus. Here, Kruger appeals to the Muratorian fragment, Theophilus of Antioch, and Clement of Alexandria. Kruger states,

Thus, we see a clear pattern emerging. At the end of the second century, it appears that Irenaeus is not alone. According to the Muratorian fragment, Theophilus of Antioch and Clement of Alexandria (not to mention Tatian) – influential and geographically diverse sources at the end of the second century – there was a core collection of scriptural books in place that the church fathers themselves did not view as newly established. (169)

He then cites from Justin Martyr, the apostolic fathers, and the NT documents themselves to show that predecessors to Irenaeus recognized canonical Scriptures, early in the second century and even in the middle to late first century. In the conclusion to chapter 5, Kruger reminds the reader, “One should also not forget that the evidence above is not just from a single church father, but from a variety of sources spread over a number of different regions. While any individual piece of evidence might be contested or questioned, it is the extent of the evidence that proves to be the compelling factor” (203).

Kruger ends with a helpful conclusion that summarizes the preceding chapters very well. He rehearses the five tenets that were given in the introduction and discussed in chapters 1-5. He gives in brief compass a helpful summary of why these tenets of the extrinsic model are problematic.

The church is indebted to Dr. Kruger. Pastors especially should avail themselves of both QC and CR (in that order in my opinion) as the question of canon “is at the very center of how biblical authority is established.” (CR, 16) The church will continue to be challenged concerning their sacred writings and it is certainly the responsibility of those pastors who serve on the front lines to be able to give a defense to whoever asks, whether questions come from the atheist professor at the local university, or the eight year old in Sunday School.

(This review was published in the 2015 Journal of the Institute of Reformed Baptist Studies and used with permission. For more information about the Journal, go to Reformed Baptist Academic Press at www.rbap.net.)

Does it seem complicated or impossible to be saved?
May 3, 2021

Who Shall Ascend the Mountain of the Lord?
February 13, 2018