The Lawful Use of God’s Law 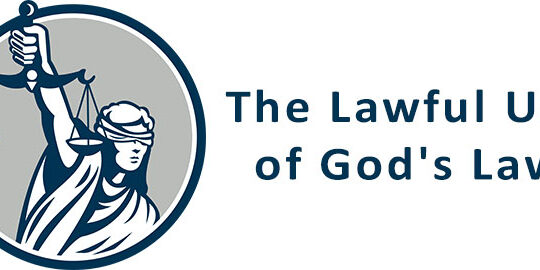 In 1 Timothy 1, Paul urges Timothy to “charge some that they teach no other doctrine” (v.3). He then indicates the nature of their error in verse 7, “desiring to be teachers of the law, understanding neither what they say nor the things which they affirm.”

The heretics desired to be “teachers of the law” but distorted the truth. In verse 8, Paul makes an important declaration: “But we know that the law is good if one uses it lawfully.” A proper understanding of the lawful uses of God’s law is a helpful corrective to the antinomian and legalistic tendencies in the church today.

The first use of the law is the civil use.

Richard A. Muller defines it as “the political or civil use, according to which the law serves the commonwealth, or body politic, as a force for the restraint of sin.”[1] The 2LCF of 1677/89 teaches that the law written in the heart of man at creation was “delivered by God upon Mount Sinai, in ten commandments” (19:2) and then states that this “moral law doth for ever bind all, as we justified persons as others, to the obedience thereof, and that not only in regard of the matter contained in it, but also in respect of God the Creator, who gave it; neither doth Christ in the Gospel any way dissolve, but much strengthen this obligation.”

The law is used by God for the restraint of sin among men.

The second use of the law is the pedagogical use.

Muller defines it as “the elenctical or pedagogical use; i.e., the use of the law for the confrontation and refutation of sin and for the purpose of pointing the way to Christ.”[2] This function of the law demonstrates man’s sinfulness and shows his need for Christ. Paul indicates this in Romans 3:20: “Therefore by the deeds of the law no flesh will be justified in His sight, for by the law is the knowledge of sin.”

Westminster Larger Catechism #96 says, “What particular use is there of the moral law to unregenerate men? The moral law is of use to unregenerate men, to awaken their consciences to flee from wrath to come, and to drive them to Christ; or, upon their continuance in the estate and way of sin, to leave them inexcusable, and under the curse thereof.”

The third use of the law is the normative use.

Muller defines it as the use that “pertains to believers in Christ who have been saved through faith apart from works. In the regenerate life, the law no longer functions to condemn, since it no longer stands elenctically over against man as the unreachable basis for salvation, but acts as a norm of conduct, freely accepted by those in whom the grace of God works the good.”[3]

The 2LCF of 1677/89 amplifies this use in 19:6 and indicates that while the law is no longer binding as a covenant of works, it “is of great use to them [believers] as well as to others” in that it functions as a “rule of life.” John Murray observed concerning this use, “It is symptomatic of a pattern of thought current in many evangelical circles that the idea of keeping the commandments of God is not consonant with the liberty and spontaneity of the Christian man, that keeping the law has its affinities with legalism and with the principle of works rather than with the principle of grace. It is strange indeed that this kind of antipathy to the notion of keeping commandments should be entertained by any believer who is a serious student of the New Testament. Did not our Lord say, ‘If ye love Me, ye will keep My commandments’ (John 14:15).”[4]

Problems regarding the law are manifold in the church today. A return to the Reformed confessions and an emphasis on covenant theology should prove a helpful corrective in this area of study.

J. Gresham Machen said, “A new and more powerful proclamation of that law is perhaps the most pressing need of the hour; men would have little difficulty with the gospel if they had only learned the lesson of law… So it always is: a low view of the law always brings legalism in religion; a high view of law makes a man a seeker after grace. Pray God that the high view may again prevail.”[5]