The Basis For Confessional Trinitarianism

You are here:
Sermon TranscriptTheology proper 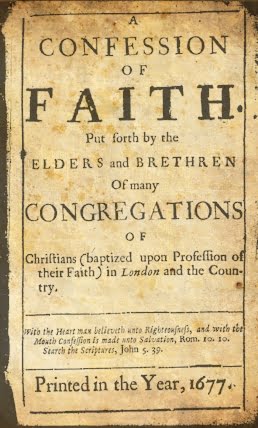 2LCF chapter 2, paragraph 3: “In this divine and infinite Being there are three subsistences, the Father, the Word or Son, and Holy Spirit, of one substance, power, and eternity, each having the whole divine essence, yet the essence undivided: the Father is of none, neither begotten nor proceeding; the Son is eternally begotten of the Father; the Holy Spirit proceeding from the Father and the Son; all infinite, without beginning, therefore but one God, who is not to be divided in nature and being, but distinguished by several peculiar relative properties and personal relations; which doctrine of the Trinity is the foundation of all our communion with God, and comfortable dependence on Him.”

As we study 2LCF 2.3, it must be understood that all the things that we have looked at with regard to God in the first two paragraphs of chapter 2 – His unity, that God’s essence cannot be divided or multiplied, and that God is without parts and not the sum of His attributes but is identical with all of those things that we attribute to Him – are true of each of the three persons of the Trinity. This means that omnipotence, omnipresence, and omniscience are true of all three persons of the Triune God. It’s not the case that the Father is omnipotent, the Son is omnipresence, and the Spirit is omniscient; or that only the Father has those three attributes and communicates them in a small measure to the other two persons, or some other strange idea.

The doctrine of the Trinity is an essential and foundational truth within Christianity. If Christianity is to truly be Christianity, it must be radically, explicitly, evangelically, apologetically, and polemically Trinitarian. As we go about our Christian lives, including the context of the church and our worship, it should all be explicitly and outwardly Trinitarian as we recognize Father, Son, and Holy Spirit. In being evangelically Trinitarian, our proclamation of the gospel should reflect the saving perfections of the Triune God. In being apologetically Trinitarian, we should defend the faith in Trinitarian terms against attacks from heretics, including those who might call themselves Christian. In being polemically Trinitarian, we also attack the strongholds of heresy. We are to tear down the Dagons of modalism, tritheism, and subordinationism as we uphold the foundational and pristine doctrine of our Triune God. And so, the Trinity is not an ivory tower doctrine that only the doctors of divinity are concerned with. It is the “foundation of all our communion with God and comfortable dependence on Him.”

The Particular Baptists had a classical and Reformed pedigree. By classical, we mean that they did not depart from the creedal history dating back to the first five centuries of the church, but rather, they upheld and reiterated the formulations of the ancient divines. We can hear echoes of Nicaea, Constantinople, Chalcedon, and the Athanasian Creed in the language affirmed by the Particular Baptists. They did not revise and reformulate, but rather, they recognized the brilliance and genius in what came before. In terms of a Reformed pedigree, the Baptists do not differ from their Presbyterian and Congregational contemporaries or from their sixteenth-century Reformed predecessors. There is a consistency and continuation of this doctrine from the outset of Christianity in the first century until now.

However, in technical and terminological improvements, the Baptists added and changed some language as compared to the Westminster Confession of Faith (WCF) and the Savoy Declaration (SD). These are not theological changes that improve anything theologically, but they do provide nuances regarding the Trinity such that 2.3 in the 2LCF is twice the size of 2.3 in the WCF. The Baptists add a reference to “this divine and infinite being” and use the term “subsistences” rather than “persons.” The Baptists retained the SD’s statement at the end after “which doctrine of the Trinity is…” and nearly repeated the First London Baptist Confession of 1644/1646.

In terms of interpretive aids, we must appreciate that the foundation of this doctrine is the Holy Scripture. It is not the case that the doctrine of the Trinity finds its foundations in the formulations of the early church or that the Nicene council rebelled against a primitive or pristine Christianity that was not Trinitarian. The church fathers who formulated the creeds were defending scripture by showing how it upheld the doctrine of the Trinity. We must also notice the revelatory development of how the doctrine is revealed in scripture: while the true development of the Trinitarian ideas of the Old Testament is found in the New Testament, the seeds that developed into the full flower of New Testament Trinitarian revelation are already planted in the Old Testament. The seeds of that flower are planted by divine design in Old Covenant revelation and are then fully revealed in the New Testament through the Son’s incarnation and the Holy Spirit’s outpouring on the day of Pentecost. This does not mean God was somehow not a Trinity ontologically prior to the Son’s incarnation, but rather that He is free to reveal Himself, His nature, and His being as He sees fit within scripture.

It is proper to use extrabiblical language to explain our doctrine. The creeds and Reformed confessions use language that we do not find in scripture, but the language is right and useful to disclose, formulate, and preach the doctrine. It is still necessary to engage in Trinitarian apologetics that defends the doctrine until Christ comes again because there have always been anti-Trinitarian threats lurking in the churches. In the seventeenth century, the Reformed confessions were delivered in an anti-Trinitarian landscape: between Paul Best and John Biddle who taught a unitarian God and the Socinians who held that there is one God as Father, Christ as the son of another substance or who is created, and the Spirit as some sort of impersonal force. There was a necessity to articulate and uphold the ancient and pure doctrine of the Trinity in the face of these attacks. This is what prompted John Owen and Francis Cheynell to become prominent Trinitarian apologists in response to Best and Biddle.

The Feast of Tabernacles – Come and Drink
October 1, 2022

The Pauline Precedent for Churches
June 4, 2022