A Faithless King and a Faithful Prophet

You are here:
Ethics 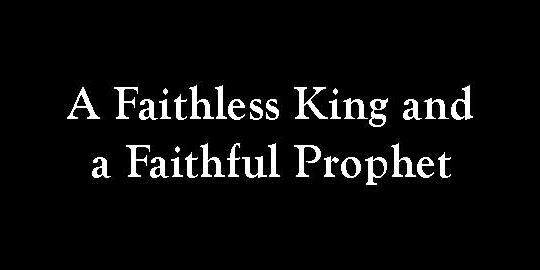 In 1 Kings 22:1-28, Ahab plans to go to battle with the Syrians in order to re-capture Ramoth Gilead. He invites Jehoshaphat, king of Judah, to accompany him in an alliance of the northern and southern kingdoms of Israel. Jehoshaphat requests divine guidance prior to the battle (v.5) and 400 false prophets testify that Israel would be victorious over Syria.

Jehoshaphat requests additional prophetic testimony (v.7) and Ahab replies that there was “one man, Micaiah the son of Imlah, by whom we may inquire of the LORD” but he further explains his disdain for Micaiah, “But I hate him, because he does not prophesy good concerning me, but evil” (v.8).

The Rejection of the Word of God

The Apostle Paul dealt with something similar in his 2nd letter to Timothy. Paul charges Timothy to “Preach the word” in 2 Timothy 4:2 and then he gives reasons for the command. In verse 3, Paul writes, “For the time will come when they will not endure sound doctrine, but according to their own desires, because they have itching ears, they will heap up for themselves teachers…”

The desire to hear only what we want to hear is nothing new; it was practiced by Ahab, was present in Paul’s day, and unfortunately, continues in the church today.

The Integrity of the True Prophet of God

We must guard our hearts and receive the entirety of God’s revealed word, not just those portions that make us comfortable. We must resist the tendency to find teachers that speak what we want to hear; instead, we ought to pursue those men, who like Micaiah the prophet, speak “whatever the LORD says” even when what the Lord says isn’t comfortable or popular.